R.I.P. (in the many senses -- at some point, will bring forth truth issues, both small 't' and large 'T' -- paraphrasing one comment, he launched avalanches of words/concepts that disallowed precision of a measurable sort) 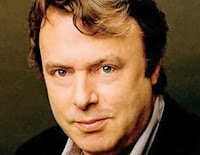 Also, am trying to maintain a prayerful, and respectful, mindset (never got a chance to discuss my points with him) while traversing his broadly ranging work.

The guy was so right on so many things. What a viewpoint! To wit: When the King saved God. Many burned, on the several sides, of this issue.

He came over here, like all of the others. It's been 400+ years now. And, we still have so much to learn.

01/22/2013 -- T-issues will migrate to issues of science and religion. -- The site referenced in a below Remark took down my comment about dreaming of Hitch (ah, can't believe that he's in heaven?). Yeah. So, here it is: Hitch (in one, he was scrunched in a public place (as if not wanting to recognize the new reality tht flowed around him), as I walked by him, he grabbed my notebook (as in EOJ material), and started to browse it; later, he and my college roommate visited me at my desk talking about a new school that they were involved in -- perhaps Hitch saw the peripatetic need, at the same time, Hitch sized me up, and I showed him the writing on the wall which is there for all to see, after they left, my whole work area went through some type of transformation, I had met several people there after they went to the wider expanse).

05/30/2012 -- See dreams of Hitch comments at the It is or it is not post. These were written at the Daily Hitchens site (and deleted). They'll be re-posted here at some point. Recent Krauss tribute. Nice. Hitch was a lot of things: he comprehended beyond the ability of most; he thought that our knowledge ought to enhance our awareness of being alive, in all of the meanings. Krauss asks, what would Christopher do? Support Dawkins, we might say. Because Hitch was, we'll use him as a focal point for arguing T-issues.

01/19/2012 -- Notice the comment of someone dreaming of Hitch's state (this can raise a whole lot of discussion, eventually). Just ran across this debate, in 2008, between Christopher and his younger brother, Peter, at Grand Valley State University. Interesting.

01/13/2012 -- Thinking about Hitch, and the wide-range of topics with which he was involved, will motivate several themes this year. Here is the first one (see the Aside -- to be expanded). Now, coming here will be a discussion of Tis (as in, it is so) and Taint (as in, it ain't so). Guess which will be assigned to which side of the argument? Some would say, and so it is (the operational stance that moves its definitions along as it learns -- you know, the business leaders (yes, Jamie, you and your ilk) think that they're smart for learning how to broaden their pockets and how to increase the flow into such -- world-class jerks, actually).

01/02/2012 -- We'll look at what might be an oxymoron (or almost so, as a whole lot of discussion will ensue about this): atheistic scientist. There are two words here of various meanings. The former denotes a position on a question that may very well be unanswerable; yet, one does have a right to conjecture that God is a man-made creation (ah, creationist thinking?). So, it would be a working hypothesis. Now, unanswerable? Yes, in the terms of falsifiable-ness, cannot be phrased publicly sufficiently to allow tests (and, as in, don't fall for all the contentions about 'literalness'  as being necessary to resolve the thing personally). The latter term ought to have connotations dealing with testable-ness, repeatable-ness, and much more. Too, a moving platform, albeit with a more firm basis in the future from current work, hopefully. To an end? Ah, just as we see no end to the horizon, why ought we see some limit to that which is (may be) unanswerable? Call it what you will. Your recognition of such, nor whatever name you apply, really has no effect whatsoever, except in a limited sense. As, the hubris of the atheist is (can be) as much of an issue as is the idiocy of the fundamentalist. Remember, our states of knowledge are becoming increasingly wrapped within our lens, filters, and what have you; do not all of these have their foundations in mathematics (quasi-empiricism) and our prowess at material manipulations (uncertainty, et al)? By the way, consider that that which is unanswerable (and unknown) may very well have an 'echo' feature which we can understand, and use for our (collective) benefits. Granted the signal may come from our conscious being (oh yes, we'll have to consider essence as opposed to property), yet from whence that?

12/20/2011 -- Apropos quote from Paul Wallace: Both the closed-hearted scientism of atheist hardliners and the narrow creationism of religious fundamentalists kill our strange and beautiful world by flattening it beyond repair.

12/17/2011 -- Mocker meets the Mockee, one might say. That theme would offer much to discuss. We'll collect the several of these that Christopher's views might have brought to the fore. Too, as a focal point, the t-issues become very interesting. Perhaps, Hitchens was an angel in disguise.

12/17/2011 -- Our import underwent, and remarked on, the barbarism of waterboarding; power needs its carvers.