Best and brightest of what?

We'll be expanding upon this further, as we go along. The context deals with the Streets. Can the Wall ever use integrity without us laughing? Is Main really reliant upon what are the best and brightest of the Wall?

Can they be best and brightest if they don't know virtue from vice? Yes, let's talk that.

For now, we're pulling from Facebook a comment about a post at Kid Dynamic's blog. Notice that the post deals with cancelling trades, as in golden sacks was let off while another firm had to eat dirt (a lot of it). KD responded to comment to his post, as follows: ... as for predatory behavior: markets are predatory. they're not about charity - every trade I do is with the goal of making money by being smarter than the guy on the other side. that's how it works.. that's the OBJECT..

My comments was, as follows:


We know that golden sacks was let off the hook (as in, trades that they did in error were cancelled - yes, kid gloves for these ones). We also know that an earlier incident resulted in another firm eating a big loss. So, here we see a post and discussion of these two.

Too, we know that things like high-frequency gaming, dark pools, and much more go toward a daily extraction into special (oh, so special) pockets to the detriment of the many. In other words, financial engineering, and other things (computational methods), have made things a shambles, despite the occasional shining of the chimera.

Kid writes about all of this stuff. In one comment, Kid (himself) says: "as for predatory behavior: markets are predatory. they're not about charity - every trade I do is with the goal of making money by being smarter than the guy on the other side. that's how it works.. that's the OBJECT..." Yes, 'tis a direct quote, and, right there, the guy brings out the core issue.

He does characterize the thing properly (as have many others of similar views). I ask, from whence this viewpoint (by necessity, jungle, dwarinian flavoring?) which does not a sustainable economy make? We'll get into that. Does it not seem that such types ought to be wrapped in a strong cloak and provided with a playground (sandbox) with which to work out their little immature fantasies?

That is, these ones ought not be the focus for how things will unfold in the future. Where did we get the notion that the talking heads and their graphical displays and all of the other technical marvels which tell us about the activity of a few (comparatively and to wit, DJIA, et al) ought to set the tone for our daily lives?

That whole notion of predatory necessity is something to address. Look. There was a time that the Vikings, at will, came down and trashed (burned, pillaged, stole) England, time and again. The poor monks could not handle the vicious cultural thing. Thank God for Alfred the Great. But, are the Vikings behaving thusly now? Well, excluding the fact that we could find some types of association on a close look, most descendants of the raiders are nicely civilized (of course, Norsemen had their culture - I'm 99% northern European, by the way).

Just because the wild web, advances in mathematics, and computing prowess both allow the proposition and disposition (used to be left to God) does not make it, by necessity, that we, and our unstable financial realities, revert back to 1000 years ago or so (even if Crusaders seem to be still in the offing).

10/04/2013 -- Oh, yes, two posts (Fed-aerated and 7oops7), but no mention of savers being slapped silly. Notice in the savers post that an image says no bullets left. Ah, yes, Ben panicked and used up his ammo. But, has he not shown all of us (and the world) that there was a whole lot of other maneuvering possible? But, too, does he know that he's cowboy'ed us into a corner? 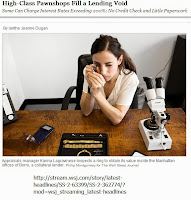 10/27/2013 --Ben has sacked the savers for years now, slapping them silly. Why? A WSJ article looked at high-class pawnshops a couple of days ago. These fill the need for people who need money but cannot get it from the banks (stupidity there, too). So, they use collateral for a loan and pay high interest. How high? Some pay over 200%, per year. What is Ben paying or having banks pay their savers (customers)? Way less than 1%. That is the best example of being out of whack with economic realities that one could ask for. Yet, does the Fed see? Why is the interest low? To push savers toward higher risk? To appease the gaming crowd (most likely this, as these are big-pocketed folks)? To help people afford housing (on someone else's back?)? ... Janet's take on this is unknown, but she has to know that they're looking like idiots. You know what? Most of those pawn loans are paid, even with the high interest. And, still, Ben slaps the savers (King Alan mentioned saving, of late). We ought to ask the Fed, what happened to prudence or does it like to reward profligacy?

01/08/2014 -- We're patiently waiting for Janet to get her feet wet. At some point, she'll get out of Ben's shadow. Hopefully, it will be soon for the savers who are being slapped silly by the day.