I ran across this article, today.

Gosh, what a title. Then, it tells us that the funds did so for 87 years. Hyperbole? Well, finance seems to have a lot of that. How do we get more science and engineering into the discipline (as opposed to pocket picking)?

So, the response might be, the S&P has been here for 60 years. Yes, close enough. But, the other funds were not around.

What gives? Well, looking at one comment, and the response of the author, tells us the story. And, there was one bit of truthfulness, so I had to put it here. Notice the caveat (buried in a comment). 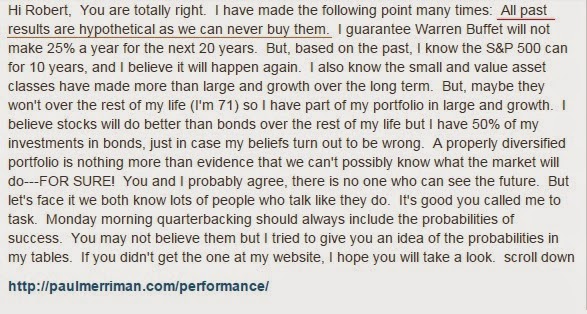 Of late, I have been doing a series to help answer questions. Now, how well I am doing is open to opinion, however, give me a little more time.

Too, if I am being hypothetical, I will say so up front. Too many financial pieces are fictional (again); yet, they have brought over physics experts. Why? To make the pocket picking more sophisticated might be one answer.

Note: These types bewail that humans are not particle, so their mathematics/modeling can get twisted. Sheesh, the topsy-turvy (from Chaitin) nature with which we have to deal is a fact (however, people are the focus and not just those whose pockets are heavily laden with their wealth).

Here are some questions and issues that bear a new look and further discussion:


Why are there such wild upswings? Ah, 'tis magic, indeed (for the takers, anyway).

Why do things drop so quickly? Aerated underpinnings, essentially (too, loses are exacerbated by the fact that the game players suck off the cream; and, much worse, the big boys are allowed shenanigans, almost legally).

Bigs boys, shenanigans? For one, dark pools. Then, quant-ifications of various sorts.

What are the poor people to do? Well, it is true that only a handful (comparatively) can take advantage of this gaming based upon fiction. But, we intend to show that that extreme is not necessary. In fact, much of it could (ought to be) pushed to a sandbox situation where the boys/girls can play at their own will (the rest of us would be protected).

But, look, folks. This guy is talking 87 years. Marx (not a follower, so no need to go there) talked of "fictitious capital."  We have a whole slew of laws and of expectations of good behavior that have been in affect, over the years (say, fiscal responsibility, etc.).

Yet, we're in this state of being in which players trashed the economy, got helped, are continuing to get help, things from the common view are crap - worse than ever, the golden teat has not been withdrawn, and more.

Hopeless? No, we intend to define the necessity for conservative methods and sustainable ways. For now, let's use stable value.

Context: Talking to a friend who was puzzled why some financial expert was saying that most will not get what their 401K shows, I got into the "cheshire multiple" spiel (look at the magical multiplier, above). But, too, we need to find the number where people are guaranteed losers. ... Put it this way, I said to the friend. If you went to the bank to get your CD money as it had matured, and you were expecting $1000 (we can figure, based upon the rate, what principle would attain that value), would you like it if you got $500? What about $750? ... No, said the friend, even a $1 off would cause some grief. ... That, folks, is the story of the esteemed market approach being pushed by Janet, the Street (not Main), and many others. ... We must not let the stories of those who pull in millions (billions) fool us and detract from the truth (under that scheme of things, most are losers).


03/22/2015 -- Jealous? No way, Jose. FED gives Wall Street what it wishes. -- By the way, I know that the article was topical. Yet, it is arguing a point that is wrong on so many accounts. The fact that it is offered within the context of the game that is now the only one in town does not change the nature of the faults. ... I'm not arguing for data-driven (purgatory), either. ... Perhaps, the air will clear when the FED gets its head out of the cloud'd smoke being pushed its way by those who are enjoying their easy takes.

03/23/2015 -- Moral hazard? Remember that? Anyone? By going with big-data's emergence (leading to studies such as the article provided), normative views have gone to hell. Or, the hellish nature that was there has become visible. Hazard? Again, bailing out those who game the system (including the house) leads them to be continue their dependence (while at the same time spouting capitalism, Smith - poor guy, and their smarts). Now, the mania is worldwide, as in, others see the U.S. taking the easy route and want it for themselves. ... On multipliers? Of course, economics/finance has these as integral to the basis; yet, we can smell test (better than stress test) the ways and means.

03/23/2015 -- Pew Research's reports will be useful: Only upper-income families have made wealth gains in recent decades. In some of the responses to comments, one author expresses disbelief in the Fed's influence. Well, we can work on helping clarify that (by more than griping about the addicts). Our research deals, in part, with how many simple folk get to experience, and enjoy, the book-based wealth that their financial reports offer them. That is, that which is beyond Social Security (but, being sensitive to take-backs as we see, recently, happening with retirees being informed that their pension is being cut). From my experience, it is a small percentage (comparatively). The one fact of the upper crust? They have more protection which we can enumerate and illustrate.

Lifting and its tides

In the interest of illustrating truth engineering's facility, we will be looking at valuations. Recall that we started by touting the hardness of the problem - actually, equivalence is not a trivial concept - see, very early posts here (Intelligence, value, and truth) and there (Establishing value).

But, the realm is finance and economics. Here are pointers to a series. The last shows that a whole lot of loose stuff is there and exploited. Why this happens will be part of the discussion.
As said, it's not simple. Yes, that which is behind truth engineering's thrust goes to the core. We have the time and interest; we are not after exploiting the situation to fill our pockets. Where are the good people who are interested?

Posted by AJSwtlk at 2:07 PM No comments:

An article in the current issue of ACM's Communications really struck me -- In Defense of Soundiness: A Manifesto. For one thing, I had to retreat nine years to reconsider something. I put this comment on the article.


The use of the "soundiness" resonated with me for several reasons. First of all, Colbert's use of "truthiness" came to mind. He, of course, was talking opinion ruling over fact.

But, this current usage bears directly on the issue of truthfulness in many ways but on these two, in particular: 1) if a computational system is not sound, when do we know if it is reliable (ignore, please, for the moment, the multitude of issues being raised - but be cognizant that many system developers think that they have no problem in this regard due to the numerical nature of their domain processing) operationally; 2) how do we increase awareness of lurking problems in a climate where hot-dogging via code (encouraged by the companies involved) throws out systems continually, and seemingly on the fly, and how do we try to alter the willy-nilly patterns that seem so prevalent the past decade or so?

In short, everywhere "älmost" true is our norm? Just as "soundiness" is something to engineer, so too is "truth" itself. Hence, my focus: truth engineering.

"Truthiness" came from Stephen Colbert. I wrote that truth engineering was not such (see image) as it was not a lot of other things. But, as we know, such a list would be unending.

You know what? Trying to enumerate definitions would be as lengthy. So, is that an issue beyond resolution?

Ah, such is the nature of the issues involved here that we will have to say that the answer will depend upon a lot of things, including one's worldview.

Sheesh, is it that hopeless? Well, categorically? No. We will, in time, explain why.

In the meantime, we will write a review of this article on soundness on Wikipedia and link it to the one about Colbert's little joke.

In the meantime, here is the Wikipedia page on Soundness.