On Quora, there is a lot of discussion of AI. This whole framework is warped as it does not consider several important issues related to humans  and computing. It is as if the guys of SV (I say silly) can run amok (boys being boys, see USA Today, 7/25/17), and we are just to marvel at their talent.

Think again. A long tradition is being ignored. Why? Engineers do not care for humanities nor do they give a mote for philosophy. Psychology? Nada.

Well, how can we address that? Truth engineering was proposed as a way to discuss the matters that pertain to the issues. Last post, I mentioned hermeneutics (see starting list). Since then, I ran into Crapularity heumeneutics (think the huge interest now in the Singularity). I agree with Florian but see a whole lot of other ways that his concept can be used. All in good time goes the adage.

Later, I ran into sociology of  knowledge (paper by Inanna Hamati-Ataya). So, I am collecting an initial viewpoint with which to launch discussions and work.

Recently, someone asked this: What is the difference between Lacan's and Jung's literary criticism? Well, I had already considered this topic from the Jungian sense. Mostly, it would have been done by some later follower of Jung, and archetypes would play a huge role.

But, Lacan? Well, on looking him up, I found that he liked Freud's approach. Too, he gave Chomsky grief. There is something to like about that. Hence, there is a thread from Freud to Jung to Lacan that needs some attention. Chomsky is in there to pull things to the modern times.

I pulled this out of a book on Lacan. 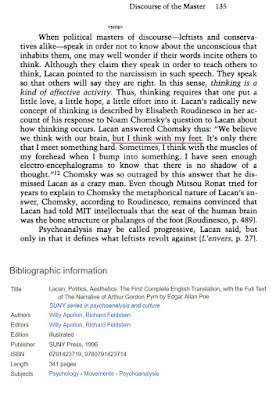 Note that Lacan talked what I might call peripatetic leanings. As he does raise a question. There is a bias for the brain. Look around, it's everywhere. AI (and SV) have taken that to an extreme. Oh, they say, replicate the brain and end up with intelligence that is artificial (and supposedly better than human).

How did we get that bias? When were those other types of intelligences (say, Gardner's; he of Harvard) thrown out?

Lots to discuss. The benefit? A more full view so that we can dampen both the mania and the hysteria. Perhaps, then, Hawkins could sleep peacefully.

Posted by AJSwtlk at 8:04 AM No comments: