We can look at several ways that truth and time might relate. Can either be a component of the other? Or, can truth be timely? What are the truths (things) that persist through time?

We can ask, in the truth (small t) sense, does time subsume truth? We know from the experience that truth may very well be limited by location and period. In the Truth (large T) sense, time may become problematic as we have seen with modern physics, or, as some views argue, Truth may very well subsume time.

In an operational sense, a decision would hopefully obtain benefit from truth engineering in a timely manner even though the process may very well need to handle the undecidable. Truth in Time may, as well, necessitate a temporal, or perhaps even a non-monotonic, approach.

In the sense of Tribe as Truth, time plays a role which has a different flavor for science than for business; this is easily seen, as an example, in terms of expected horizon; business has a notable short-sighted viewpoint, for the most part.

Also, for science, a discipline, as a group in the context of reductionism, has an assumption set that contains entries from other disciplines (or groups) for which there will be a time element. In this regard, is newer information more trustworthy than something older?

On the other hand, business does not have the clarity of science, not necessarily from disinformation as the simple act of reducing a time profile while generalizing context can introduce fuzziness.

09/02/2009 -- The Vienna School says that undecidability heavily influences their take on economic views. That Quants run off after money basically ignores these issues.

To follow a group’s view or one’s own mind may be the question in many situations. Hence, truth engineering must consider any interpretative viewpoint and its basis, since truth views can be held by a group or by an individual.

In a look at the group, it would not be pejorative (no such intent is meant) to use tribalism as its ethnocentrism (mean-centric tendency) pertains to truth. Considering the individual and truth would require a deeper look at cognitive issues and the fact that creativeness is more an attribute of the individual than the group.

In an example from where we have the most modern of thinking, any individual, who follows an independent path, say in pushing for a Kuhnian type of event in any discipline (a group), or for any non-mainstream idea, can end up being seen as crank or genius or even in-between.

That the balance may very well be resolved with a subsequent generation is immaterial for the moment.

Further complications can be brought forth by introducing computational issues, especially artificial intelligence and some types of applied mathematics. Generation, in this context, may include the shorter-term type related to improvements in computing, modeling, and algorithms.

In the modern world, most people are members (or adopt the view) of several tribes and have to balance, perhaps, conflicting positions.

For instance, any business can be thought of as a tribal entity which attempts to overlays cognitively those who are employees. How well this is done contributes to success. One might even say that if a CEO is a leader, rather than a pirate, this will help in the integration.

Yet, that tribe of the business does not supersede the many other tribal influences of the employee, except for the time of the work day. But, even in the work-day period, it is easy to see the different tribal views (is it not a characteristic of diversity to allow this?) in operation. In subsequent posts, we'll see how this might influence operations, such as in crucial areas like earned-value analysis.

Is there anyone who doesn’t deal with some of this every day? Would our lives be easier if our daily hogwash dose dealt with our operational limits, such as measurement problems, and was not from muddying of the waters, not by necessity intentional?

One can think of hogwash in relation to truth, probably more normally in an inverse relationship. We could say that the more there is hogwash then the less there is truth, where a hogwash meter, such as one proposed for evaluating retirement options, could be the opposite of the ‘truth’ dial mentioned in an earlier post.

But, it may be more complicated than that. For one thing, there may be an issue of how much intent might be behind the hogwash, as we see with disinformation. For another thing, the absence of hogwash does not mean total truth due to issues, of which the quasi-empiricism arguments are an example.

An argument list could go on. Is it easier to assess untruth (such as hogwash) than truth? An approach in applied logic found this to be so as does science with its provisional basis founded upon empirical proof. Is there, and even must there be, a role for intuition?

Truth, Things in Themselves

At some point, the truth to be engineered will need further definition, to which goal these posts are working. That truth can be talked about with a big T or little t will be considered; that truth many times deals with ‘things as they are’ is important.

For the purposes of starting small and since 'truth engineering' pertains to the computational, we can put the big Truth aside for a later time and limit the scope (for now) to that which is human created. Modern computing supports applied analytics where we may or may not see a clear demarcation between what is being modeled (thing in itself) and the model. CAE is one example which deals with types of simulation; another is flight simulation. Other examples will be looked at later.

Flight simulation has improved such that a simulator can be used to substantially train a flight crew; too, it can provide feedback about design choices which ties back into CAE, say in the context of a new airplane. Yet, no matter the extent to which a simulator represents a flight, we can know that we have a difference between a real flight in an airplane and an experience in its simulator (which only takes you on a virtual flight).

Consider this, though. If one were blindfolded, could one tell the difference between being in a real good simulator versus being on a plane that is actually flying? There are several variations to this theme that might be interesting to explore.

One concern of truth engineering deals with issues such as this one.

Complicating the situation is that some ‘thing’ may itself embed models that represent other ‘things in themselves’ leading to a recursive dilemma. Again, a plane may have sensors and actuators which require computational support.

Does the combination of things (where ‘in themselves’-ness can be resolved) and models (and we have seen that models can also embed things) lead to requirements for truth engineering?

Much of our comfort in our analytics may be well-founded, yet we ought to keep in mind those issues related to quasi-empiricism and, perhaps, our foundational weakness.

07/05/2009 -- Recent comments point to too strong beliefs in the computational. In regard to the flight simulator, we could use it to propose a 'being' test analogous to the Turing test for intelligence. You see, blindfolding would fool the eyes, one could make noises. But, how would one fool the nose and the intuitive sense?

05/18/2009 -- With things kicking up dust again, we'll need to re-address these issues related to truth, being, computation, et al.

08/01/2008 -- It turns out that a good discursive domain for these issues relates to money and what it is, including how its roles are important to our well being.

02/24/2008 -- This post dances around some of the intrinsic issues, for good reasons; yet, the topic must be tackled in order to unfold further the issues related to truth engineering.

01/17/2008 --Given that the unknown unknowns are raising their heads, and that parametrics seem to be a main truth stick, this concept needs to be re-addressed with better examples.

12/30/2007 -- This early post still stands, though it may need an update such as some words dealing with calibration and truth. That we have become dependent upon computers is irreversible; actually, we need to embrace the phenomenon as the younger generation seems to have. There are lots of questions to ask and ponder about how we get these things under control (example was the emergence of wild-west behavior as the web opened frontiers - not unlike the old-gunslinger west of the US's manifest destiny).

Posted by AJSwtlk at 7:38 AM No comments:

Truth, can it be engineered?

A recent white paper on Truth Engineering and the use of the term by Oceani Digitali (missing link -- see Remarks 01/01/2011) indicate that this might be a topic whose time has come. This blog will gather links related to the topic and, hopefully, allow reasonable discussion about the need for truth engineering.

If for the moment one did not define 'truth' but used the term operationally, one could apply a dial from 0 to 1 where 0 was lack of truth and 1 was the presence of truth. Then using this dial, 'truth engineering' involves the conceptual framework and the means to push the dial toward 1.

Our experiences, including many long years of argument about truth, have shown us that pinning down a definition of 'truth' is not an easy task. Yet, the new dynamics, in all possible senses - of which the web-based and other modern methods (such as advanced analysis that can be applied to developing modern products) make for interesting challenges, that have been brought on by computation, especially as it pertains to our knowledge - mandate a technical imperative for which truth engineering ought to be a player.

Truth engineering concerns itself with how we humans and our artificial intelligentsia relate, so we can have beneficial experiences in the physical and the virtual worlds and minimize less-than-benevolent side-effects from using our creations. Truth engineering may even suggest that human-to-human interchanges may very well be improved through similar techniques.

01/01/2011 -- Evidently, Oceani Digitali was a project related to trusted computing. Their white-paper, in English, use 'Truth Engineering' (first occurrence on the web of use of the term). That precipitated the blog. However, Oceani Digitali has, somehow, gone away. But, Truth Engineering remains as a basic concern with a broader extent than computing. However, software, in its many manifestations (including almost physical realizations), seems to be evolving into a main ontological tool, albeit with an applied mathematical flavor. That games (virtual and cyber) have accelerated in so many ways, of late, is a very good example. Many others will be detailed. 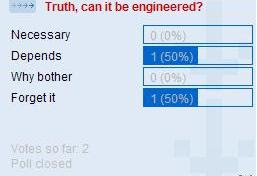