Today, we hear rumblings that Russian paid trolls to put out fake news. Heck, Silly Valley has allowed us to get to a situation where we do not know what is what.

And, we just followed them down the path of perdition (I have used perdition a lot in these blogs over the years). How can anyone be surprised? We ought not have let loose the Internet as we did. So, now, it's a mess. It was a mess the whole time after the commercial thrust got going.

I have harped on this a long time. In fact, from a mobile sense, I am 1G/2G. From a computational sense, I do a lot of local processing. I rent a VM for my website. Cloud? It's a muddy mess. I do use it for storage. Carefully.

When I see Silly Valley's results over the past couple of decades, I grieve. I'm old. But, the youngsters are going to have to clean up the messes. Oh sure, jobs.

I wrote this on Wikipedia (Knowledge Based Engineering - KBE futures, KBE theory) back in 2006:

KBE, as a particular example of KBS, is a multi-disciplinary framework that has more than practical considerations. Not only will KBE require successful handling of issues of the computational (Ontology, Artificial Intelligence, Entscheidungsproblem, Interactive computation, Category Theory, ...) and logic (non-monotonic issues related to the qualification, frame, and ramification problems)), it will touch upon all sciences that deal with matter, its manipulations, and the related decisions. In a sense, Product Lifecycle Management allows us to have the world as a large laboratory for experimental co-evolution of our knowledge and artificial co-horts. As noted in ACM Communications, "Computers will grow to become scientists in their own right, with intuitions and computational variants of fascination and curiosity." [19] What better framework is there to explore the "increasingly complicated mappings between the human world and the computational"?
A continuing theme will be resolving the contextual definitions for KBE into a coherent discipline and keeping a handle on managing the necessary quantitative comparisons. One issue considers what limits there may be to the computational; this study requires a multi-disciplinary focus and an understanding of the quasi-empirical. Given the knowledge focus of KBE, another issue involves what limits there might be to a computational basis for knowledge and whether these are overcome with the more advanced types of human-machine interface.
It is important not to treat the KBE technology in isolation, but focus more on its role in the overall Product Development Process (PDP). During development, it is important to streamline the process from knowledge capture towards software implementation. To this end, close-coupling between Knowledge Management and KBE is desired. Transitions from data and information inside a Knowledge Base towards software code is of particular relevance. The best results can be achieved by using model-driven software development principles, which includes automatic code generation and round-tripping. The use of KBE during a PDP not only requires the ability to easily set-up (existing) KBE applications from a knowledge level, but also the ability to store back the results after execution of the tool. In order to use KBE on a strategical level as decision-making and planning support mechanism, it is important to relate results back to the system engineering domain (requirements, functions, options, embodiment). From deployment perspective, a better integration with other IT tools should be realized. Couplings between KBE applications, Knowledge Bases and Simulation Workflow Management software are of particular importance. The iProd project tries to take KBE to the next level by addressing these aspects.[20] The iProd framework uses KBE technology as a reasoning mechanism to infer new product knowledge and, as a means to automate virtual execution (CAE simulation) and as MDO-enabler. On an IT level, it prototypes KB-KBE couplings (code generation, round-tripping, results storage and automatic workflow generation) and SWFM-KBE integration (on the basis of the software-as-a-service paradigm).

It still applies, though the section has disappeared.

Three years ago, I spent a little time with Codecademy (post: Codecademy, again). My profile is still there, from that time. 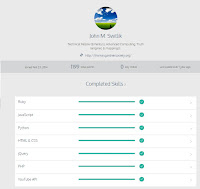 My purpose was to review progress by looking at the tools that were available. For a month, I went through the lessons and worked the exercises. It was interesting to see the on-line instruction. Naturally, I found a few bugs but overlooked them. At the time, it was free; now, there is a Pro option with more of a focus on results.

Also, at the time, I saw testimonials about people starting careers with this approach. That was interesting. Today, I ran into another (different method) that represents the time. The guy has blogged about his introduction into coding and the success that he has found.
Then, I saw that one of morning show hosts talked to someone about an effort to teach coding to women. There are thousands of jobs open, I understand.

Hence, this little reminder. One problem with so many people just coding is that we're losing sight of issues related to quality (many issues). And, one sees this lack everywhere. Quality would include the user perspective, especially concerns related to safety, stability, and such.

I have already written about little businesses being bitten (Content and more). I just ran across an issue myself the past week: Technology's impact. So, we have issues related to content's management, efficacy of technology's use, and whole lot more.

But, a very important one relates to this theme: Does code matter? Based upon my experience, this glut of jobs is short-sighted. Code does not provide the business intelligence that everyone is after. Now, if code is mainly small perturbations (such as was brought by macro ability in spread sheets), then, that could very well be content related.

However, how many times do we need to re-invent the wheel?


03/23/2017 -- Two recent videos (stumbled upon them). 1) Peter Metzger talks about his 31 years with Emacs. He shows a little of the history of computing devices. Run down memory lane. But, nice to see the old thing, Emacs, still having traction. 2) Which then brings up Richard Stallman. Richard started Emacs ball rolling (some have followed his sainthood into the editor wars - Emacs vs VI/VIM).

Also, he was first in looking at truth maintenance. But, in this video, Richard talks about his free software initiative and emphasizes, time and again, that purty systems, like Apple, have created a jail, made it purty, and then convinced people to jail themselves. He does not like what I call the dumbing device. He stresses surveillance. I see it as a tether to nonsense. Hence, I am 1G/2G, even in this day of talk about 5G. In terms of truth maintenance, Richard and his advisor (Sussman) worked on constraint satisfaction. Another aspect deals with defeasible reasoning.