The website will be configured. Too, the definition awaits further discussion. However it is technically oriented as shown by the contents of some posts. 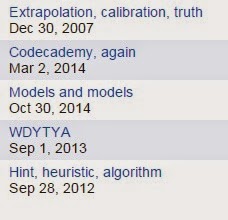 The posts being read today are shown in the graphic. This is not unusual.

Perhaps, it is time to bite the bullet and get back to the nitty gritty. People are looking for that (see the below Aside) as confusion abounds. Why? Where do we have any one working on technology (especially "cloud" oriented stuff) whose motivation is for the betterment of mankind as opposed to filling their pockets?

There will be one change in content, though. God will be mentioned from time to time in this context. Generally, it'll be something like "God only knows" or one of those older adages that said a lot (why? - the argument will start with either/or). Perhaps, even "Insha'Allah " will appear. We will see (know, though, that we will argue beyond this limit - Tegmark quoted).

Aside: The blogger grates at the claim by some that they cannot find technical workers (what I think that they mean is that they want some particular skill - which will become dated - that they want to exploit; too, any presence of "conscience" or looking properly at the larger picture is not needed (as in, suppress such since the powerful have shown that such is antithetical to progress - hah! oh, Lord, help us). There is a brief start of a bio at the bro-blog (FEDaerated, see Note at this page on the chimera).

So, today, I re-looked at "Extrapolation, calibration, truth" (30 Dec 2007 - so, eight years ago; remember those times?). Right on. There have been many such posts, here at Tru'eng and at 7oops7, over the years. But, then, like the whole economy, the largess got me off-track (is not Janet backed into a corner?); we'll get back to things that matter.

In the meantime, the world has changed quite a bit. A few links will be gathered here which will feature in future posts.
The list is expected to grow as we organize.


01/06/2015 -- Working for other than money? Yes, many (very many can?) do this. ... BTW, this past month, I was in possession, for the first time, of a mobile device that was less than 10" in presentation ability. The endured for about three days. I intend to write about the experience. ... But, all of the attitude that is (has been) displayed by the techies is aerated. Of course, we need behavioral motivators of which hubris counts highly (must it?). So, we have a little more "smarts" in the client which goes against the grain of thinness (which never ought to have happened, anyway) that was a rage for awhile. ... I can see some benefit for a tablet and the smaller companion. It is interesting that MS' Surface is getting some attention by the road warriors. ... So, am I a believer in the Internet of Everything which is, in part, foretold by the mobile things (especially when they are full of sensors and such)? Well, have you looked around and seen all of the security (and other) issues that abound? ... Well, IoT ought to stop, pause, and see what might bolster the basis (by the way, I am available for consulting on such) so that we allow good things to come to fore for our progeny and their's and so on.