Truth and the senses

We'll start a new series and dedicate it to the three dudes who will feature in posts from time to time. The theme? Well, don't you just get spitting mad at the intellectuals (and, the best-and-brightest are not they, necessarily) who think of truth as some dis-embodied thing, an abstraction if you would, when, everyone, with any sense, knows that it's something related to being (all sorts of things to discuss there)? Wait, what exactly is truth? People have been hung up on that for eons. Making the issue to be mostly abstract'd flimflam was a modern technique meant to keep the waters muddied.

And, these abstract notions lead to pain and suffering on the part of the many. A modern case in point, which is really the epitome of crap (when looked at properly -- to wit, near-zero), is the 'smart' device which has been handed to the user by the suffering of myriads of hapless folks. So what that they might be on foreign soil or under some flag other than ours. We cannot have a sustainable economy for this tiny planet without systems taking a multitude of factors into their scope that have conveniently been left out. Unfortunately, the john-gault wannabes don't want this type of thing to come to the fore.

So, we'll suppress it for now and take another tact. However, before we do so, we state that the above rant relates directly to computationally driven systems in which the supposed elite run things, with their numbers (ah, mathematical interloping), in a manner that causes unrealistic demands upon those who have to see things to fruition. In particular, we'll have to, eventually, address some growing issue where we'll claim that anyone who is going to make a decision about how something ought to be done by another better be able to do that very thing him (or her) self (the essence of the military way of building leadership, if you look closely).

In other words, expecting cannon fodder'ish modes from others means that you get your butt out there in harm's way, to boot.

Now, let's look at how closely truth is tied to your senses. We'll start with vision, but thinking about the nose is fun. Ever know by smell when someone is being more of an arse than not. Judgmental? Yes. Remember, we're homo heuristicus, in essence (arguable point). Biases keep us healthily involved in maintaining a future for ourselves and our loved ones. We'll look at this, from all sides.

But, if we go back to vision, truth processing is very much tied to what glasses we are wearing. Consider that you have many pairs at your disposal. And, how you see things, react, and more relate directly to what you have on. I know. Some claim that we need to always be rosy viewing. Or, some will argue what glasses you need for any type of situation. 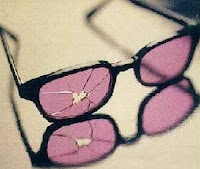 Guess what? It's an individual's choice, within reason. And, here we'll need to stop a minute and give a nod to John Stuart Mill (did Google forget their pledge?). We don't infringe upon others, unless it's self-defense (or ordered by someone with appropriate authority and the right to do such ordering and so forth).

Still, the individual has the ability to process truth as he/her wishes. Now, for those who are literally minded, this is a metaphoric approach (actually, we'll get to allegory, later). Some of us have been four-eye'd since childhood, yet everyone has been so bespectacled even if they are not aware of the fact. Too, if you're seeing things as another wants you to see things, you're using an adopted pair (yes, groups can share visionary biases).

So, what's the point? Several points that have been alluded to in posts here over the past few years. Some might say that truth is in the details somewhat arguing against those who expect that their elevated views are what is what. Joel Orr said that he learned that truth was not at some limit of abstraction, rather it's in reality. We do have to consider map-territory issues. Why? Orientations toward the detail'd view get into a relativistic trap with shifting sands of time always blowing in the wind (tee hee).

Our basic humanness will allow some structuring, via patterns and what not. Look, we made it this far in the long eons of the Darwin'd environment. Too,the common framework advances with technology. Look at the arguments offered by Flynn.

What I think that we ought to discuss, with the superpositioning of the computational on ourselves, is not loss of soul but a subtle entrapment from which we'll not be able to disentangle. That old bifurcating discussion of continuous versus discrete has not been laid to bed, despite the protestations of some. Analog/digital? We can think of several of these type of dichotomies.

You know, folks. A large part of the problem is that the commercial element took over the internet (yes, Google) for its own purposes. They funded the advancements. The side effect is that we're being glued into glasses that are very much limiting. Why? Ah, we'll have to look at that fully.

Of course, there have been many who haven't allowed themselves to be pulled into the pit. You know, the most aggravating thing to me is that mathematical insights have been used to force people into situations where universal categories are being trashed for the sake of bowing to Bayes (gosh, he must be rolling over in his grave - again and again).

Our whole imaginative apparatus has been disheveled, raked over the coals, and just downright raped and pillaged. It's not too late to back up and look at the matter, again and again. One motivation is the importance to the future of the open-minded pursuit of happiness and the other benefits that we know are given us by right (Divinely and self-defined).

10/31/2012 -- There are many other things of interest to TE. For instance, I picked up the Proof of Heaven book and gave it a scan. It's a matter of glasses how one interprets the experience. Makes me think of Sagan's book (remember, a wonderful journey, then find out that the thing never left the area -- so, one then has to wonder about subjective versus not -- experience, except for the limiting view of science, is more subjective than not - unfortunately, it's that way for a purpose). Not scoffing, as we'll eventually get around to the topic of the dream and truth. But, it'll take moving into the t-issues which had to happen sooner or later. For now, I want to see how long it is before Dr. Eban capitulates to the materialistic view.

10/31/2012 -- When I first read about the Koch (see San Luis Obispo Tribune) interview, I responded with a comment that same day and then deleted the thing the next day. The idea was to write Koch-colored glasses as a post. Well, I never got around to doing that, but, perhaps, I will no matter who wins the election.