This post continues the look at Beans and such. In short, we are all of a cohort. By collection and analysis, we (the collective) have sufficient data that can be reasonably useful. 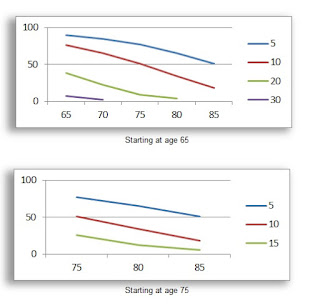 So, we can produce a chart like this that shows an expectation for the number of years one might plan for. Of course, we could all plan to live to 150. Would that make sense?

The top chart is for the early boomers. Then, we look at the situation during age 75 to age 85. Taking the top one first, notice that the 30-year view vanishes about the age of 70. Essentially, some will live to 100 and beyond. But, based upon data-to-date,  not many.

5 year look? It is quite rational. In fact, in the below, we would expect that one would plan for five years at a time. Then, the plan would be updated yearly.

Notice, that the green line runs down quickly. It, basically, says that, after age of 83, one ought not put much thought into planning for 20 years. Now, that does not say take no thought. As the line does not go to zero (see below). The red line is for 10 years. At 93, there is some noticeable chance of going for 10 years. But, at 93, the likelihood of another 5 years is more than one might imagine.

Aside: The IRS gives one a couple of years, each year, as one goes beyond 100. Also, there is this adage: live like there were no tomorrow; plan as if there were to be many.

And so, the issue of outliving your money is not to be taken lightly when planning. For this, we have all sorts of things, like long-term care insurance, etc., to think about. However, note, too, that some of these insurance companies are now telling their customers to not expect the agreed-upon payout and to belly up to the bar with a higher premium payment. That is, many of these contracts (some from years ago) are being re-written.

Now, we have some expectation of duration that can quantified. But, what about the flow? Well, first, let's consider that there is income and expenses. For income, many of the advisers like to push people toward the higher risk types of things. Sheesh. Sacrificial lambs is how we ought to see these older victims.

Planning ought to be conservative. Then, if there is gravy (home runs), great. However, if done right, this type of planning is an almost perfect hedge. As one also needs to consider the time involved. Of course, with a short time frame (and spending down to the last penny), one can be extravagant. But, we are talking flow over the longer haul.

Flow? One thing that anyone of normal situations ought to do is have a budget that looks at income and expenses. If not that, at least, have some idea of where the money comes from and goes (and whether one is getting further into debt).

There was a thing called zero-based budgeting that was the rage for awhile. It can work for those who are planning their future, at any age. The nearer one is to retirement, the more one ought to know in this regard.

Aside: I have 15 years of spreadsheet (several sheets per year) details, by category, that started prior to retirement. This is very easy to do and can be enlightening. For those who travel, a few months of daily doing the equivalent of an expense report for a trip ought to be easy. If you are traveling, there are extra expenses; however, some of those at home continue.

In the top chart, we are looking at the inflow and outgo (as a function of number of years expected). "dly" means that the flow was normalized to a day. This type of discretization is not that hard to do. And, it is very useful when you are looking at any type of outflow in relation to income or just in its own right. Sometimes, outflow can get heavier than normal.

Of course, "#yrs" relates to the possible number of years (with probability) that one can expect.

What the bars indicate is that the number of years does influence flow. If you want to spend your money with no control, then, expect it to not last (or look for bailouts).

BTW, there is a scale on the flow here that is immaterial. The notion in this case is comparative looks at the future states. However, does this imply that there would be a residue left for those who may or may not misuse the gift? Sure. That is another subject to address.

And, there is only one rule to success. Spend less than income (over all, the ins ought to outweigh the outs). If one cannot do so now, one ought to try to plan to get to that state of affairs. In this case, the out-flow is actually less than the 30 year figure (net savings situation).

So, expenses (and incomea) ought to be reduced to a daily average. With this view, one can relate the outs and ins so as to have some notion of whether one is bleeding or not. That is, when outs are high, they can be normalized to something that is consistently comparable.

For times of heavier outflow, there are considerations of category that come into play. For instance, staying in a super expensive hotel for 10 days averages out to less than the per night charge over a 30-day period. Trick? No, how one trickles out from one's bucket (and income) is a matter of choices. Too, major things (appliances, vehicles, etc.) would be handled in a manner so as to recognize the service life (etc.).

By doing this type of exercise, one can look at flows (out and in) by category. Which, then, gets back to some thoughts on inflow. Of course, one might like (or think that they might want) to hit a home run (no envy of Zuck or the like - see near-zero, below). But, think of the risk. Even the young ought not be too loose with risk, if they are thinking of the future. I know, the horizon can be a long way off depending upon age. We'll get back to that in future posts.

Right now, the older folks ought to think of near-zero. That is how our economy runs. That is, for those who make it big, legions (very many) lose (lose and lose and ...). Thanks to John Nash, et al, we have a very warped view of reality that has crept into acceptance. And, near-zero suggests, strongly, that the older folk be wise and not let old (or young) advisers get them into trouble. Those advisers will not bail the old folk out when things collapse.

Sheesh. Just read today of a mania. ETFs related to leveraging against the Janets of the world. Does the craziness never cease?