Is math discovered or not?

Actually, this video caught my eye since it represents a new way to discuss matters. And, I was astounded at how well it does cover the issues. But, there are several points where the video ought to be stopped, to allow discussion. Perhaps, at some point, I'll get to that where comments point back to the particular second/frame in the video.

Now, to the question. It is both discovered and created, as we find with all human endeavors which are embedded in the natural systems. Think of it this way: this issue is very much analogous to the discrete/continuous debate. In fact (if there is a fact that can be claimed in regard to things like this), the question really is a continuum (we'll get back to that).

The problem has been trying to determine where the demarcation line ought to be placed (fuzzy existence) in specifying where we go from discovered to not. In an operational sense, many of the choices taken for people to do things work and, thereby, resolve the problem from that perspective.

Of course, some workarounds (math is full of these) have worked better than others. Yet, the underlying conditions that prompt the query and debate do not abate. 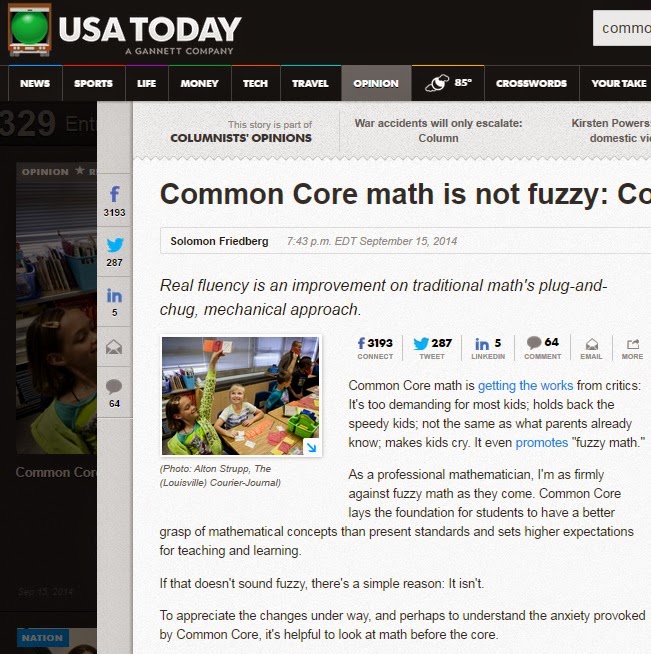 Aside: Here is a recent Common core op-ed. It applies (no, there is no digression here). In this op-ed, there is an implied criticism of fuzzy techniques (a system, if you would). So, this is another of those age-old bifurcations. The view expressed in the op-ed stresses, too much, numeric foundations which then lead to all sorts of mis-guided mathematical shenanigans (yes). That "demarcation line" mentioned above?  By necessity, it is fuzzy (in a metaphoric sense, okay?). That we have been overlaid with an insidious mesh that entraps, in part, is the responsibility (karmic) of bad math. That the advertising (marketing) ilk have spawn so rapidly, and, essentially, ruined the Internet is one of the direct results of those bad choices.

I love the emphasis on rules (very much inconsistent, in this op-ed). Learning to follow someone else's footsteps implies rules. Success in mathematics requires memory abilities as well as the other facilities, such as pattern recognition, etc. We cannot get rid of that.

Why don't we try to be peripatetic and teach via play (yes, as in acting out what those abstract notions are supposed to be representing - actually, we're talking a strong type of intuitionism (say what?)  that has not been tried, that I can see.). For one thing, it would meld with a whole lot of problems that we see related to trying to get some kids to keep still.

As long as we're on the subject, having mathematics based upon a less pure platform goes right along with this is/or (discovered/not) paradox. You see, it's AND (has always been). Along with the play attempt suggested above would be an almost flip-flop of the model (advised use). But, no one seems to have been allowed to try this, that I know of.

A larger ramification? When choices have a large sphere of influence, then more care is needed. Yet, everywhere we see cowboy (no offense to the real cattle persons) acting as if the world (despite the potential impacts on us) is their lab and little play thing. Care, in that sense? Unfortunately, we have gotten to the point where "care" is not part of the model (lots to discuss in this regard).

Beside pointing to the quasi-empirical (it's briefly alluded to in the video - extra points if you find this -- later, I'll put in the frame) issues, we'll weigh in, soon (PTIME, perhaps), with a novel approach, on the question in the title of the post.

In the meantime, see the recent renewal of faith.

11/03/2014 -- We'll be getting back to this, but some feel that progress comes from those who can see patterns in a new light or bring them to light. Almost like the Flynn effect, subsequent thinkers can see more clearly, especially if patterns are handled in a manner that persists. That is, patterns can be chimera-like as can any problem of the human mind (and, that is not in any way meant to criticize imaginative efforts -- nope, some patterns may only be accessible within the framework of fiction - sci fi, for instance). Now, to the crux, how one handles the issues of either/or is very much pattern'd and ought to be thought of that way. We'll go on, in time. Choosing on the side that does not relate well to reductionism is as amenable to reason as is the stance denier (remember, perception is very much dependent upon one's time and resources).

01/16/2015 -- Discussing this (or any part of the old Queen's accoutrements) and deciding which way to go would depend upon one's view of normative mathematics; this is a subject about which we intend to weigh in from the truth engineering (quasi-empiricism) frame work.