My efforts have mostly been singular in nature, following the mode of the autodidact. There are lots of reasons for this which do pertain to the origins of truth engineering. So, expect that theme (in a sense, mentor-less) to be addressed from time to time.

However, all along, I have run into people who were influential in the sense of penetrating the awareness because of their talents and, thereby, of making contributions. You see, the autodidact's role, and how that ought to work, is an open-ended issue.

Aside: Some seem to see money, and accumulations thereof, as a true measure of value and success. That little bit of reality was mentioned earlier in this blog (see, Richer is smarter). Of late, one might consider that there might be something there (to wit, the new m(b)illionaires, ala MS, Google, FB, etc.). Is there no end to how much some can rake in (well, note, please, that people are borrowing to leverage, again -- chimera is more than a mere fantasy/delusion)? ... The truth is that money does not own truth. We know that money means power (many times), so our task is to speak truth to money (power), always (how?, as the warped minds of money do not know how to listen or to think properly). 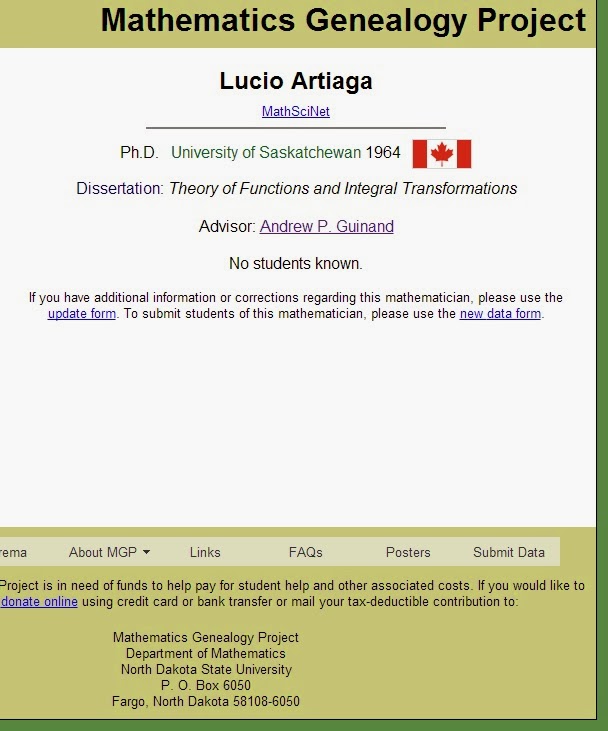 So, back to acknowledgements. The first will be to recognize the influence of Professor Emeritus Lucio Arteaga with whom I worked at Boeing after he retired from the Mathematics Department of Wichita State University (Shockers). His influence was very much mathematical, in a peripatetic sense (to be explained). Our discussions occurred over several years and dealt with foundations, topology, and issues of advanced computing.

Lucio (Math Genealogy 14698) obtained his PhD at the University of Saskatchewan in 1964; the title of his dissertation was Theory of Functions and Integral Transformations. His advisor was Andrew P. Guinand (Math Genealogy 14696) who was a pupil of Edward Charles Titchmarsh who goes back through Hardy to Cayley. That is a nice pedigree.

Lucio's contribution, and counsel, was timely and much valued. He helped me to attain a more full appreciation for the breadth and depth of mathematics. I appreciate that I received books from his mathematical library.


02/25/2014 -- According to the Mathematics Genealogy Project, Lucio has the following in his tree (not in any order), as ancestors: Isaac Newton, Galileo Galilei, George Howard Darwin (son of Charles). Some of his uncles and cousins are: James Clerk Maxwell, Alfred Whitehead, Bertrand Russell, Ludwig Wittgenstein, Saul Kripke, George Gabriel Stokes, Sir Francis Galton,

02/26/2014 -- Mentioning Lucio made me recall the circumstance of our first encounter. I had, right before that time, the good fortune of getting exposure to the Lisp machines. I was both developing on, and administering, several of these, of different ilks: Xerox, Symbolics, LMI. The domains were varied, from classic IT problems to applied mathematics and engineering. At the time, the interface was graphical (think later Windows, and pre-Mac - hence, the attitude toward the cute, little Mac - too, my first touch of C++ was in the mid-80s with it being compared to the Lisp machine environment); the framework was frame-based (early approach to objects); the technology appealed (if someone could afford the price). Some configurations (LMI) had dual processors where one had both Lisp and a Unix system (Motorola chip, if I remember correctly) on the same bus.Later, Texas Instruments provided both a Lisp machine and a LMI card that could be inserted into the later Macintosh. Software was abundant (we can list these). Many modern systems were prototyped in this environment (say, computational mathematics). In particular, I was using KEE (out of Stanford's E-MYCIN). One day, I had the opportunity to demonstrate what I was doing to Lucio who immediately saw the mathematical implications. Of course, Lisp came out of a paper by John McCarthy. In short, Lucio became involved; later, the techniques evolved such that they were still effective for a decade and a half (still are, given what I see embedded in advanced approaches). Too, his interest, and established qualifications, provided me a SOUNDing (pun intended) board (lots of things to discuss, in that regard). ... ToBeContinued.

03/03/2014 -- Mathematicians have ancestors, know about it, and honor them. What other field does that? My mathematical pedigree:

08/07/2014 (edited 04/01/2017) -- Georges Metanonski's autodidact start: My universities (formerly, two chapters, now off-line - My Universities 1, My Universities 2). The query of importance about the autodidact's role in society is this: does such learning bring into play insights that are not attainable under the regimen of the institutional environment?

01/15/2014 -- There are many models that are of concern to my work. Of these, an important one deals with things that manifest themselves in human affairs, say markets. Oh yes, if the tone of all of this sounds strange to you, or grates, then, please, note the normative stance. Know it all? Nope.

03/06/2016 -- Dr. Lucio Arteaga died on May 22, 2015 in Lenexa, KS. This morning, while doing some work in Combinatorics, I was thinking of Lucio's strong conceptual foundation. We will have to get back to that theme.