We have a lot to be thankful for. Itemizing these things can be interesting and, even, beneficial.

That we saw a pepper applier, recently, work with such efficiency and zeal brought to mind several questions. Such as, are we any better now than we were 400 years ago? Why do the carvers (and the burners and the hangers -- as in Iran, ever see a squadron of cranes used to dangle bodies by the neck?) put so much effort into getting efficient? 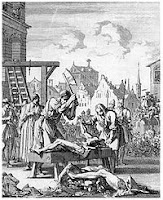 Consider, please, this example of quartering. We can thank Edward III for letting the mode become commonplace. 'Put the people in their place' sort of strategy, using tactics like the Treason Act.

The image shows Sir Thomas Armstrong being worked on, posthumously.

This? In 1684 which is a mere eight years before the madness descended upon Salem. Can we be thankful that we have progressed beyond such things?

Some think that the evidence against Sir Thomas was doctored. Have we not seen that sort of thing in our times?

Why does all of this still have some ring of truth (the core focus of this blog) to it in these modern times?

10/15/2013 -- Pre-Halloween thoughts brought me to this post. I ran across an example from Essex County, Massachusetts related to a family during the turmoils of 1692 (behind Salem's prominence as the spooky/witch place). The image shows those who were accused, some of them executed who are part of an extended family.

01/20/2013 -- State of affairs: business per usual, kill lists for drone targets, and much more. The Marines want to use "mindfulness" (some Buddhists wouldn't step on a bug); not being critical, but is not there a chance that they could get inspired to be more peaceful?

12/16/2011 -- This guy is a national treasure, almost. Everyone ought to see this wateboarding video (from two years ago). Gosh, Dick, how would you fare? Hitchens explains more on this sign of barbarism running rampant.

"In 1536 a more severe law was passed stating that those caught outside of their parish without work would be punished by being whipped through the streets. If caught a second time they could lose an ear and if caught a third time they could be executed."

11/23/2011 -- Though the topic is somewhat troubling, it does represent several things that we will discuss here and in the other forums. Much has been written, and debated, about life, liberty, and more. The U.S.A. is a couple hundred years or so into its unfolding of a framework for peaceful, progressive living. And, there has been no end of troubles, both internal and external.

As well, new things have emerged. For instance, who rules, why they might rule, and how they ought to rule are points that need attention. Of late, power and money have intertwined to create a top-down mess; yes, one successful lobbyist in D.C. says that some problems arise from too much power in Washington that is easily manipulated by the monied set. That is, politicos, in my words, salivate at the sight (or even the thought) of a buck (going into their pockets). There was a recent article about insider trading making some rich.

Yet, at the same time, these types do not properly compensate those who are serving their country. This is another story that we'll look at.

That leaders are elected probably naturally trends toward the mess that we see now (the un-workings of the super-committee, for instance). But, we don't want tyrants assuming control, either. What a quandry!

So, who ought to rule? The best-and-brightest? How is this determined? Those who now get such labels have surely made some things worse in many ways. Let me count the ways (Harvard figures). So, that'll be a topic of interest. The recent downturn has so many culprits that it would be funny except that the consequences are dire and real.

But, let's consider the royalty and its problems. That is, the old order, in some view.

Why look at these types (beyond the fact that we've had 1000s years of experience with the bumblers)? What has emerged, with the advances in systems (all types), are planetary institutional views (yes, the corporation, that which has been given the rights of an individual by those gowned persons who sit at the bench) that are above any country and really have no control (besides that provided by the egos at the top - and, we all know their motivations).

This reality leads to the need for us to look at the Magna Carta, and the like, as being necessary to rein in the reign of these super types (0.001% or less --- 100% minus 99% is just too gross of a measure). Even the consumer, the supposed backbone of the economy has little power. Why? Bucks have been sucked out of their pockets.

What else can we learn from royalty? Well, Edward III, mentioned earlier, is an example. His desire for total control (and we've seen innumerable examples of these types) needed some support, so, of course, we get the divine right of the kings. We'll be looking at this, too.

What about the people and their rights? Oh, you mean the common man and woman? If they have any rights, they'll be God given. Was that not stated in one of our documents? The 99%'ers know this and are expressing some deep intuition. However, how do we establish this notion in more than just words on paper?

From time to time, there is a harmonious state that comes about. Some of these have even been more than short-lived. Prick the skin of some old hippies (who may now be of the suited class) and there'll be the old blood. Some claim that general education (hey, thanks, early New Englanders) supports a trend that is upward. The educated man does not make a good servant. We all know how slaves (has very many meanings) are kept from their rightful opportunities.

But, does education lead toward money grabbing mindsets? Oh God, please not that. We know that this is not the case; to wit, any of the middle-class scientists who have worked and contributed, any of the economic worker whose remuneration is less than 'rent' (we'll go into this further), and very many more.

For that matter, take any of the enlisted military persons (yes, E series, as in underpaid, under-appreciated, and under the Os whose egos are without bound) who risk life and limb despite the poor treatment (Walter Reed, remember? -- ah, that just barely scraped the surface).

Why bring up the Os? Well, the upper ranks there have their royal attitudes (we'll go into this, to boot). Now, there is no cause to misunderstand the intent here. Of course, we need hierarchy for order (perhaps, one could argue that non-uniform distributions of wealth is a natural outcome, to boot -- somewhat). That whole environment is top-down and command driven. Nice. It works; to an extent.

Where have we ever seen a real bottom-up attempt? The modern environment has developed enablers that will allow such a view to become a reality. One of the enablers would be the 'cloud' (though, there are several issues to address -- undecidability, for one).

Some have been fortunate enough to have found a bottom-up working experience. These are rare. In some cases, it goes too far as what we see is a coddling of a pampered set (as if they are not replaceable).

Aside, what's worse? A pampered (diapered, actually) boss man (or woman) who throws their weight around, has tantrums, and essentially disembowels (see above) their workers or some worker who has the needed talents in some specific framework so as to be cowtowed to by their companies (excessive pay, et al)?

There are many ways to carve and oodles in the set of those who can undergo carving. The trait of a wise person? Even if one finds oneself in a carving role, there is a choice about whether or not to fill this role. All sorts of moral arguments can come into play here.

But, a core issue is the following of orders that are wrong, or unconstitutional. So much to discuss there, to boot.

So, we're back to something that relates to intelligence, whatever it is. Those who are at the top of the top-down do have talents. Can these be measured a priori? Too, some slough through life as if there is nothing between their ears. However, in the vast majority there is a substantial subset of those who are of sufficient talent to do the roles of the topper-most. Ah, is that so?

Yes, and we do see some upward movement when the environment allows this. In fact, the meritocratic push demonstrates this reality.

Aside: it is atrocious that some allowed gaming of the student financial system in order to line the pockets of fat cats while enveloping students into indentured servant-hood; there were all sorts of this type of gaming that is not necessary nor desirable to a sustainable system.

The military does demonstrate the issue, to boot. That is, the uppermosts are not, by need, out of the military academies. Too, rising in the ranks implies successful experience and making the most of the opportunities (mind you, not equivalent to being an opportunist). Somewhat, one might make this claim for a company.

Yet, the latter is too political (we'll get into this). Some who rise in business are good at directing others; in trying situations, some could not wipe their own behinds (ah, that trait of being ineffective in real ways needs a lot of characterization -- fortunately, I've seen enough up close to have a lot of material to use).

A group of professionals that I know passed the leadership hat around. When they could, as those who want business per usual could not fathom such a thing (did I mention shallow -- short-term -- thinking (disguised with mathematics -- atrociously) as being an attribute that seems to have been rewarded of late?).

'leadership' (what is that? isn't it sickening hearing 'leaders' brag of themselves?) -- ah, what about leading oneself? It's like the saying of neither a borrower nor a lender be (neither a leader nor a follower be). So much to discuss here.

What role can a 'free' man take? How about being autodidact? This role, people, is going to be the most important one in the future that is emerging. And, it will involve 'know how' that is related to more than just collecting money, fame, or other spiritually detrimental assets.